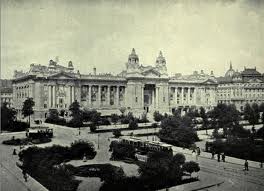 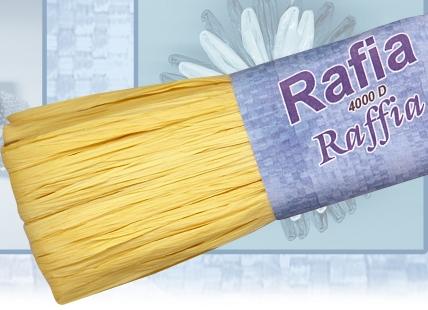 WIN THE GAME TO THE CPI AND INFLATION

The crisis in our country is costing us headaches, unpleasant situations that we observe through our most intimate people and even to ourselves. It is very hard to get up in the morning, put the television and listen to the number of unemployed that there is, the corruption that exists and the our daily bread... The people who lost their home.


Today I will share information that I hope to reach everyone who as possible because it will help to gain profitability against all forecast and which removes US CPI and terrible inflation that we comes consuming since the crisis started... the "feeding" theory.

First of all, we need to know two concepts:


Inflation: is increased and sustained prices of goods and services in relation to a currency during a given period of time. When the general price level rises, each unit of currency reaches to buy fewer goods and services. i.e. inflation reflects the decrease in the purchasing power of the currency.
A common measure of inflation is the price index (CPI), which corresponds to the annualized percentage of the overall variation of prices at the time.
The negative effects of inflation include the decrease in the real value of the currency over time, the discouragement of saving and investment due to uncertainty about the future value of money, and the scarcity of goods.

This shows us how raw materials have dropped their prices important levels in comparison to a few years ago. As the energy we use at home Board; butane will be arriving in a few weeks at 19€, electricity pay 9€ more a year ago and a half... And as wages have dropped gradually in recent years losing value of inflation and what we pay in comparison with previously.

CPI: is an index in which the prices of a set of products known as "family basket" or "basket" are valued. It is determined on the basis of the continuous survey of family budgets a number of consumers acquired so regular, and variation with respect to the price of each, with respect to a previous sample.

So we have an idea, in these months if we stuck the same with same products shopping cart us out more expensive to buy it in Spain than in Qatar. In Qatar its price would be 120€ and in Spain 200€ us. I know that you will be thinking... If Qatar is a country of millionaires! and so, but its economy and inflation is more sustainable than ours. 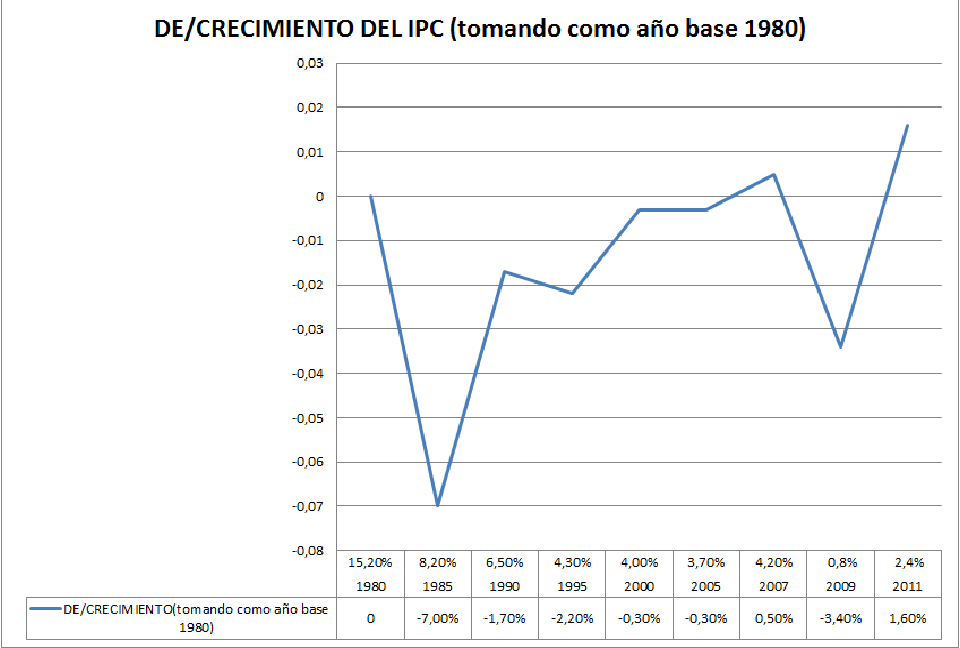 His historical graph we see the evolution of the CPI of 1980-2011. the year franco died the CPI was at a high point due to political uncertainty and the fear that it would bring us the transition. It just by descend quickly and progressive until 1985 but it was settling a slow progression upward which declined in 2009, with positive expectations that produced the ibex 35 rose 6778 points to the 12000.

We have to read between the lines is that after 2009, the CPI rise was very strong coming in higher than 1980 levels. Troubling levels because today we are as when democracy began to be born. If he enters the 2012 within the positive the fact again is 2.4%.

This helps us to draw several conclusions:

The day group opened its first store in Spain in 1979 and, since 1990, its growth has been spectacular. That year bought dirsa chain and, in the following two years, mercapopular and daily saving supermarkets. at the end of 1992 it had already more than 1,000 stores in Spain.

In 1995, he entered in Greece where it operated until 2010 (fleeing from the Greek disaster). Then it was portugal and to follow they jumped the Atlantic to argentina. Then France, would come to china and Brazil. its international vocation has given rise to only 41.5% of sales come from Spain. 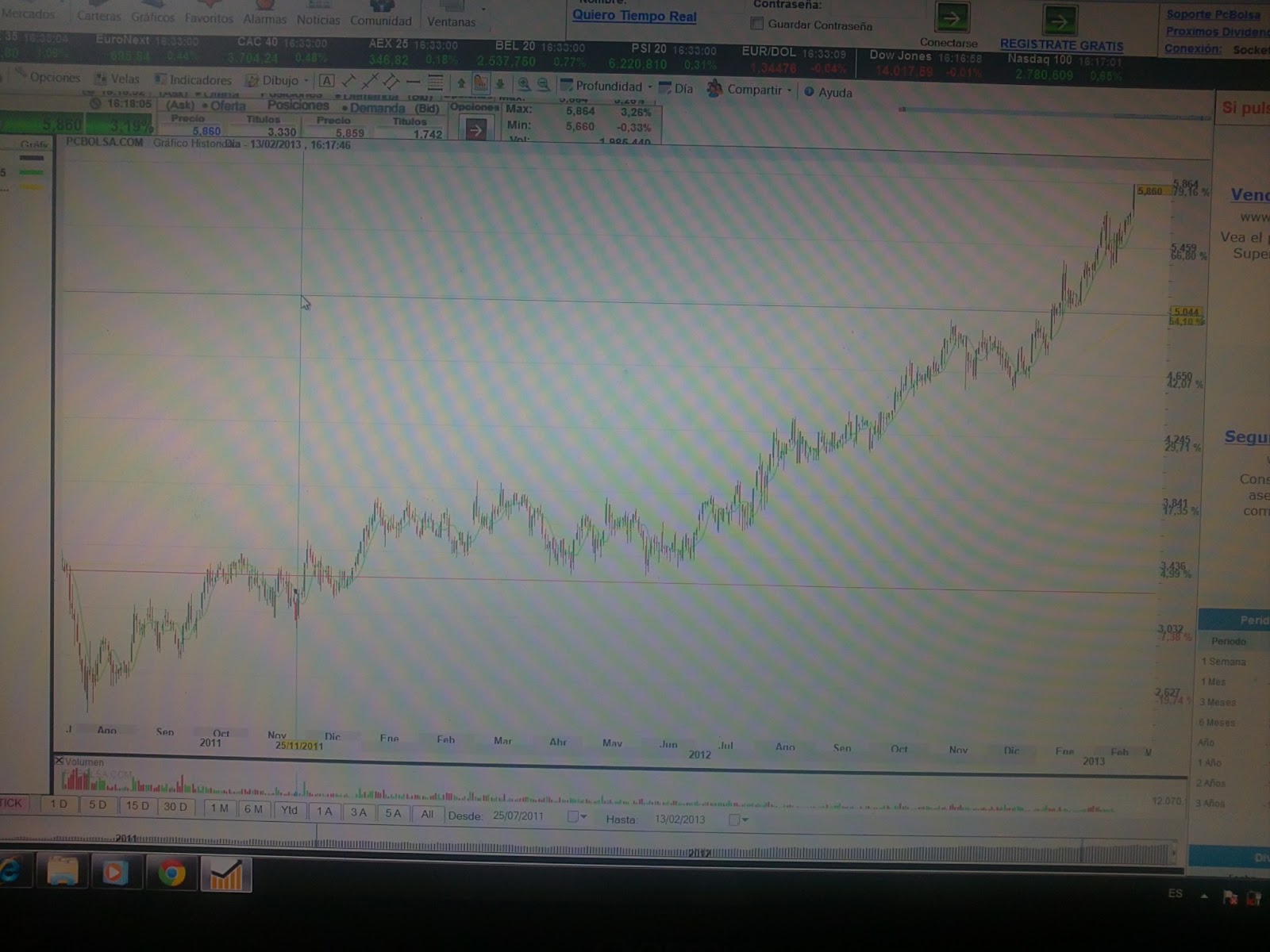 In late January decided to leave the employer of supermarkets which was (aces), to merge today to ASEDAS, association that mercadona is its main partner. Replicating synergies with one of the strongest in the country.

They have improved their social image increasing deliveries of food to the Food Bank by 67% compared to the previous year chasing the brake of the food waste in the sector.

Thus, it is an action with long travel if it is accompanied by the ibex 35 and one of the promoters of the Spanish food industry. The track that leaves us is that bearish day products there is no in many of the issuers. Something extremely rare in commodity speculation.

Having no products put or bassists should wait for the moment in day quote in 5.15€-5.30€ ranges to enter with a quoted product is the warrant, with a 5.5€ strike call.

It is a multinational chain of distribution of French, being the first European Group and second worldwide in the sector. In 2012, the Group has 9.994 stores in 33 countries (19 countries integrated), 4.314 shops in Europe (except France), 4.635 stores in France, 675 stores in Latin america and 370 in asia. It employs more than 360,000 people around the world. its consolidated sales reached 101.3 million € in 2012. the largest carrefour hypermarket was built in 1972, is located in portet-sur-garonne (toulouse) 24.400 square meters, is the largest in France. Its activity focuses on three markets: Europe, asia and Latin america. 56% of its business is produced outside France, although 79% of the total volume of business they accumulate between France and Spain.
The owner of the company day undoubtedly could not be other than carrefour. the multinational was smart when taking the decision out to bag the company away from carrefour image... There by mid-2011.

One of the obvious reasons for the upward climb of day was carrefour would allow shareholders to "benefit from the potential" development of the supermarket firm. On the other hand, day could benefit from "greater flexibility" to manage its growth in their markets.

For carrefour advise an investment "invest value" (long term) in actions that speculation products I've searched my broker's commissions and there is nothing. Enter at the moment that is complete correct your let-down 5-1 day. that is, below the US  20€. 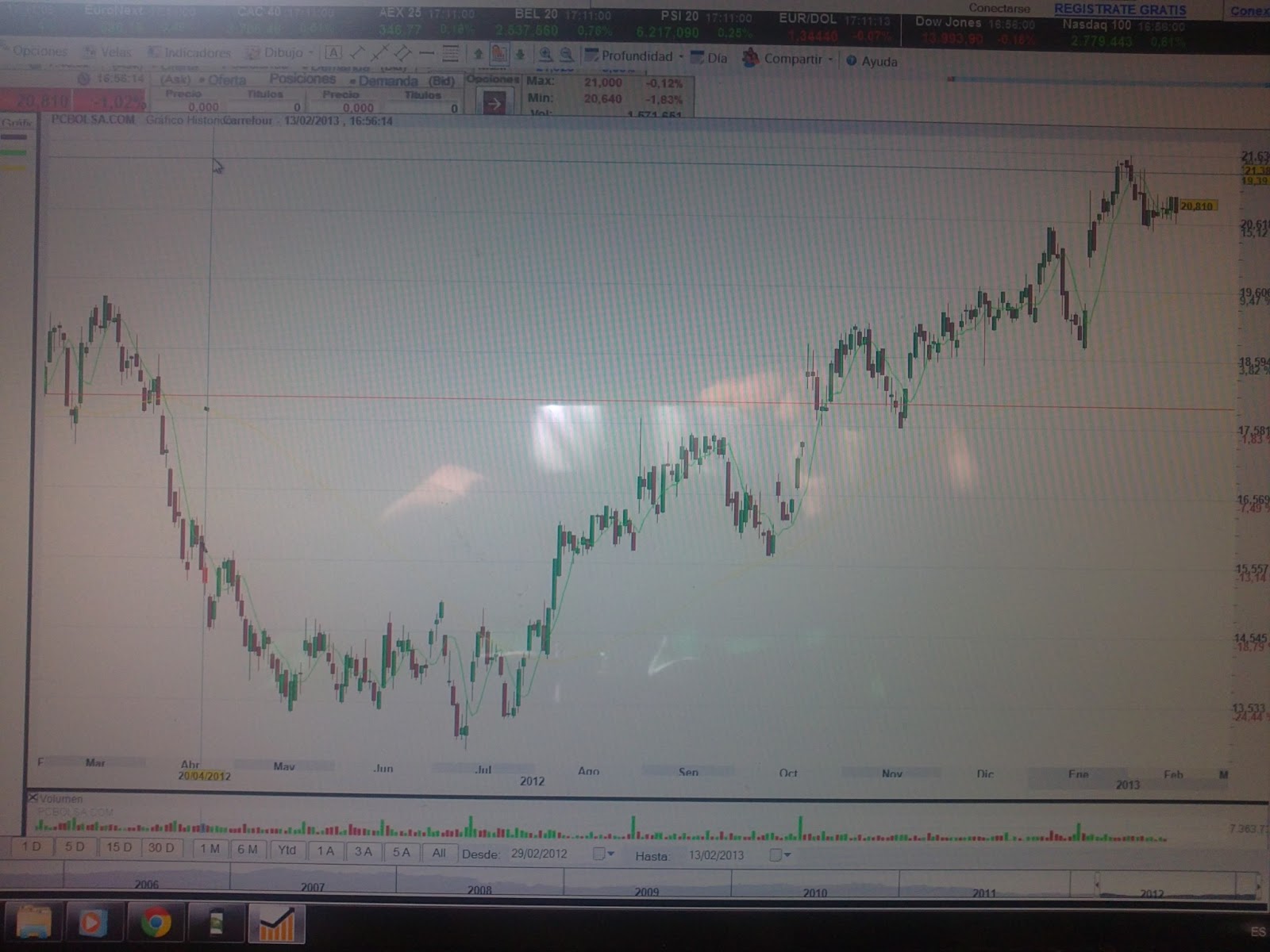 Supports (floors of our strategy)

19,623€: little worrying level.
18,753€: level which can be reached, normal.
17,564€: maximum level where we'll stay because it will not have deodorant that will eliminate our sweat.
heating elements (roofs of our strategy)

annotation: all of what excellence pass is greed and avarice. If we exceed that level let us a little and hopefully not as duracell rabbits lasts, lasts and lasts... then can you regret and you can not go back.

It is a distribution company, integrated within the segment of supermarkets, with 100% Spanish capital. It is present in 46 provinces of 15 autonomous communities with 1,414 supermarkets (current data) with an average of 1300 - 1500 square meters by local. They have a market share of 13.5% on the total area of power in Spain. More than 70,000 people with relevant contracts work today.

Since 1993, mercadona originated in the philosophy of total quality.

In short, this philosophy is determined in two large blocks:

Commercial: the commercial strategy developed by the company is spb (always low prices). In addition, is working on the assurance of the intrinsic quality of products promoting the strategy from the beginning of life.


Human resources: the total quality model has led them to consider as second primary objective the worker. According to my sources, it is that 100% of the more than 70,000 people who make up the Organization are fixed. also have another principle that is the pay 100% of the wages in the case of incapacity for work, enjoy minimum wages that exceed the average of the sector, as well as investment in training of its staff which are intended for an average of 450€ per worker. as I like to be realistic, in first instance I'm going to believe half of the sources found in this paragraph about human resources. only that half we are facing one of the most competitive companies and growing to gigantic in these years rhythm because they take care of the most important asset that a company has... the worker.

Mercadona is a company quoted on the stock exchanges so at the moment we can only look evolution so great that it has. but... If an investment bank thought to convince Juan Roig (President´s mercadona) that the price is suitable for your departure to the Spanish Park... friends there is no doubt that I will focus until they are gone.